Hello! Hope all my readers are doing great and really feeling February’s vibe, especially after we got through the longest Jan ever amirite?!

I am back with a post about my recent trip to London. We started planning the trip around Thanksgiving, and in just a short time I was able to plan a pretty comprehensive trip. We chose to go to London because it was my cousin’s wedding and also my husband Aditya had never been. I went as a child but hardly remembered it. After lots of research, we found that there were a plethora of Indian bars and restaurants, and endless gin, and were totally sold! The only thing is we figured we might get bored in London because of the weather, so initially we planned on taking a side trip to Andalusia, but after scoping out the plans to Andalusia we realized it would be too exhausting. Instead we figured we could easily visit Paris, but the riots and public transportation strikes were off-putting. In search of alternatives, I googled “short trips from London” and found a few ideas. Bath, UK caught my eye after reading about the ancient Roman baths and thermal hot springs. In the end we decided to do 3 nights near the wedding venue in Wembley, 2 nights in Bath, and 4 nights in downtown London.

My mom, Aditya and I traveled on Virgin Atlantic from Boston Logan to London Heathrow non-stop. Prior to our flight, we took advantage of our lounge access with our Amex card and got free dinner and drinks at the Air France lounge. This was a fun trip because some of my cousins were also traveling for the wedding as well, so we were able to hangout in the lounge all together and get some pre-wedding bonding time in. We took a 787 plane type which Aditya chose because it is a newer plane type that circulates fresher air so that you don’t feel dry and tried on a long flight. Unfortunately, on our flight back our plane was a A330, so it was super drying (luckily I packed my handy in-flight essentials kit!).

We spent 3 nights in Wembley at the Hilton London Wembley for the wedding. We did some shopping at the Indian stores around the area, and explored the rural London areas. Two of the nights we went into central London and hungout around Mayfair. I got some recommendations from my coworker for hip things to do in London, and she suggested Sketch Bar and Claridge’s for high tea. Sketch was a really cool, artsy French bar. We of course found a Kati Roll location in Mayfair and got some late night Paneer and Chicken Kati Rolls. 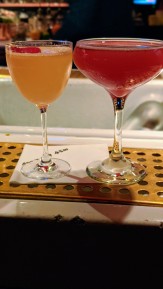 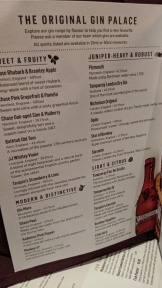 Cuz and I at hookah

Masala Fries at the Terrace

From Wembley we went to Paddington Station to hop on a fast train to Bath. It was a bit pricier than taking a bus, but time is money IMO. I’ve only been on a fast train in Italy, and the experience was great there. This train to Bath was aboard the GWR (Great Western Railroad), and it was even faster than the ones I’ve taken in Italy. Upon entering Bath, we felt like we traveled to ancient times due to the Roman architecture and quaintness of the city. In Bath we booked our 2 nights at the Gainsborough Spa Hotel, which was highly recommended by Conde Naste as one of the best hotels in the UK and one item on a bucket list of things to do around the world. The hotel was amazing. Legit 5 star service, beautiful room, and it is the only hotel that taps into the natural thermal springs in Bath.

We spent our 2 days in Bath exploring the ancient Roman Baths and our nights in the hotel thermal spa, which was so relaxing! Our hotel’s bar had fancy mixologists who helped pair gins with tonics based on the notes in the gin. For example, I got a fruity gin paired with an aromatic tonic, or a juniper gin with a Mediterranean tonic. We also took a tour on Mad Max’s tours to see Stonehenge. A lot of people say it’s just a bunch of stones, but this was truly the highlight of my trip. Our tour took us on a private mini bus to the Costwold villages, to Avebury (an even older neolithic formation), and lastly to Stonehenge. Stonehenge has an interesting history. The purpose of the formations is still unknown, but it is suspected that they were used as a burial site or temple by Pagans around 3,000 BC. When I got back from my trip and binged the latest season of Sabrina on Netflix, they mentioned how Stonehenge was used by the Pagans to harness a particular form of energy which is derived from the specific circular shape of the stone formation. Although it’s dark and gloomy in London, the sun came out to give us a beautiful sight and memorable pics at Stonehenge. On our last day in Bath, we tried the infamous Bath Bunn at Sally Lunn’s.

Bar at the Gainsborough Hotel 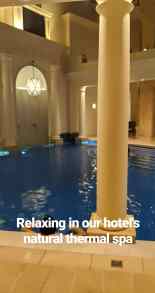 The Thermal Baths at the Gainsborough Hotel

Bar at the Gainsborough Hotel

From Bath we hopped back aboard the GWR back to Paddington Station and took an Uber to our hotel. It was difficult to pinpoint a quality hotel in central London, some were super pricey with small rooms and small beds. We love a generous amount of space and an American style King sized bed, so we went with the sister hotel to the Gansevoort Hotel, NY, called The Curtain Hotel in Shoreditch. I researched the Shoreditch area and immediately found that a Dishoom location was within walking distance from The Curtain. How perfect?! I have saved Dishoom on my list of things to do in the world ever since Mindy Kaling (love her!) recommended it. Dishoom has a fusion Indian menu with a Mumbai feel and mimics the Parsi cafes in old Mumbai. I was looking forward to trying the Bun Muska and chai flavored cocktails. Shoreditch is a non-touristy location, so we got to live in a Brooklyn style area surrounded by hipsters dressed in street wear. It was a really cool location and the hotel was swanky. In Shoreditch, we spent most days at Dishoom and grabbed a tour bus to hop on and hop off for 3 days and experience the hot spot tourist locations such as Buckingham Palace, Kensington Palace, the London Eye, Trafalgar Square,  Tower Bridge, and the Marble Arch to name a few. Our high tea at Claridge’s had amazing scones with fresh clotted cream and was wicked bougie, but fun. Touring London was exciting, although the weather was dark and rainy (which is typical London) and there were surprisingly way too many tourists, which I didn’t expect since we were there off-season. 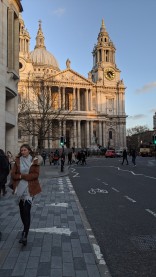 Hutong at the Shard 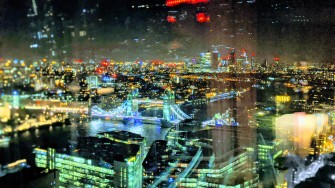 View from the Shard

Hutong at the Shard

I would say my favorite parts about London were the amazing gin & tonics, dinner at the Shard with a view of central London, and Stonehenge. Although we enjoyed our trip we were eager to go home back to our Saatva bed! Well, thank you all for reading and until next time!

Hi, I’m Sophia! About me, well I’m basically a female trying to navigate the realms of life and gain perspective on what ultimately matters most. You can catch me getting critical medical devices out to those in need (my 9-5), chilling at a local lounge on weekends, painting, traveling and now blogging! Hope you enjoy the inner workings of my mind and my experiences. Xoxo, S View all posts by prettypinkchai

Hi, I’m Sophia! About me, well I’m basically a female trying to navigate the realms of life and gain perspective on what ultimately matters most. You can catch me getting critical medical devices out to those in need (my 9-5), chilling at a local lounge on weekends, painting, traveling and now blogging! Hope you enjoy the inner workings of my mind and my experiences. Xoxo, S